When I was offered the chance to live with a Kaleidescape system for a month, I thought it would be fun to compare the high-end Kaleidescape server/media player combo and a more mainstream streaming device. like Apple TV. Not being an audiophile or a video guy, maybe I would see the quality differences or maybe I wouldn’t. More than anything, I wanted to experience one of these systems in my actual home, rather than where I usually see it being demonstrated: in the controlled environment of a trade show booth or performance hall. exhibition of dealers.

As someone who covered the custom integration industry before Kaleidescape launched in 2001, I was familiar with the brand from its inception. Over the years, as technology evolved and its price went from “I can’t afford it” to “until I make other big purchases for a few months…” , I had come to the conclusion that Kaleidescape was the best media server money could buy. Other brands have come and gone over the years, but if you had the cash to burn, there was no better way to experience a movie collection than through a Kaleidescape.

For many potential customers, however, compared to an Apple TV, Roku, or similar, it’s often hard to justify the cost, especially considering what you don’t get from a Kaleidescape. You don’t get access to original streaming or archived TV content from Netflix, Apple TV Plus, Disney Plus, Hulu, Amazon Prime TV, HBO Max, etc. You also don’t have access to live TV streaming like you do through a Hulu. or the YouTube service. All of these still require a separate streamer or Smart TV interface.

What you get from Kaleidescape is a way to store large collections of movies and concert videos in an elegant interface of the highest quality. Even with Gigabit Internet, real-time streaming still means movies are compressed and not quite to the quality of what you find on a Blu-ray disc. With Kaleidescape, on the other hand, your movie resides on a local server after downloading it from the Kaleidescape Store (in about 15 minutes). It’s a difference in quality that would be especially noticeable on a larger screen.

Going into my review period, I wondered if after all these years of seeing Kaleidescape presented in environments controlled by people more technical than me, if the quality of audio and video performance would be as evident on a system installed at me, on my own TV or projector.

For me, the differences between the “reference quality” audio and video touted by the high-priced Kaleidescape and the mass-marketed AppleTV streaming device were initially harder to discern than I thought. Because I only had one Ethernet connection to both viewing locations, I was forced to disconnect the Apple TV while watching Kaleidescape content, rendering a quick A/B comparison ineffective.

That being said, throughout my time with a Kaleidescape system (two Strato C movie players connected to a 12TB Terra movie server loaded with around 75 movies and concert movies), the superior quality of video performance and audio became clearer (literally) to me the more I used it. To borrow terminology from the photography world, the depth of field in movies was clearer and more three-dimensional when watching Kaleidescape content than I had ever noticed in the same movies on my Apple TV. I noticed details in the background of scenes that I had never really captured in the past and more vibrant colors. The experience was more like watching a Blu-ray version of a movie, but without the hassle of loading a silver disc into a tray and waiting forever for the menu to appear.

When it comes to audio performance, I had a similar experience, with more aural detail and the depth of the surround soundtrack more apparent than usual. When watching a dogfight scene in Superior gun, for example, my surround channels were engaged in a way I’m not used to hearing, as the jets seemed to pass above me and behind me as if they were right there in the room. I turned to my wife to see if she was impressed, and I couldn’t take her attention away from her phone. At least one of us was impressed.

However, to say that these differences were demonstrable for an average consumer might be an overstatement. On a 65-inch 4K TV, most content looks so good these days that it’s hard to find a reason to complain. For jaded smart home magazine editors trained to look for AV performance flaws, it might be easier to make the case for Kaleidescape’s performance attributes.

I still believe Kaleidescape’s main selling point is the system’s user interface. Kaleidescape has always touted the simplicity of its user interface and menu structure, allowing easier access to favorite movie scenes and, in the case of concert movies and musical movies, specific songs. Of course, for those still using their DVD or Blu-ray player, jumping to a favorite scene is pretty easy too, but again, we’re talking one movie at a time and the tedious process of finding a movie disc. money and to load and unload it. With Kaleidescape, your video collection is displayed on screen, available in seconds and easily searchable. 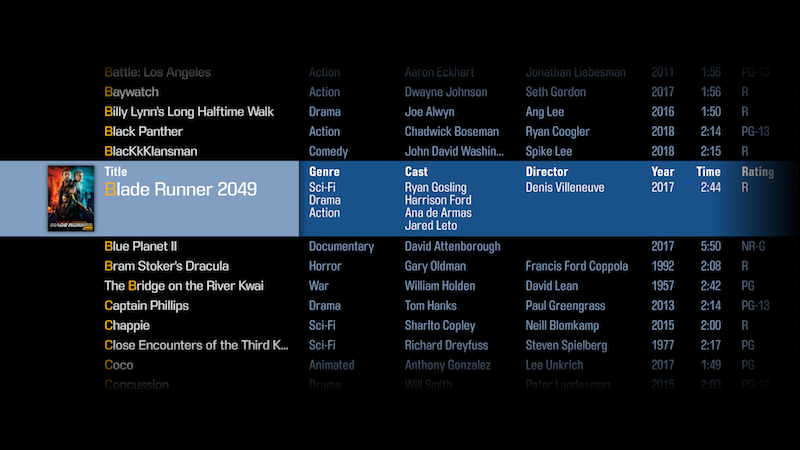 For those who haven’t experienced Kaleidescape’s legendary user interface, the most memorable menu view is a screen full of movie disc cover artwork. Using the intuitively designed Kaleidescape app or a remote control of your choice, when you hover over a specific coverage (e.g. Adele’s concert at the Royal Albert Hall in London), then, after a few seconds, the cover surrounding your selection “reorganizes”. ” to cover the art of records belonging to genres similar to your selection. In my Adele concert example, my menu surrounded this selection with the Eric Clapton 70and anniversary concert at the Royal Albert Hall, an INXS concert from 1991 and a Queen concert from 1981.

Side note, comparing the INXS concert (which I absolutely LOVED by the way) and Queen, the quality of the original film footage from the Queen concert was so much better than it looked like it was shot yesterday. The 1991 footage from INXS looked more like the 1981 footage (it was a dark day at Wembley Stadium in London, so that was probably part of the problem there.) [End of digression]

While I love the disc art view, which has been a selling point of Kaleidescape systems since 2001, it’s not always the preferred way to search for a movie. For a more traditional menu experience, Kaleidescape also offers a list view, which I found to be a better option when searching for a specific title or just trying to better understand what I had available in “my collection”. You can also turn off the “reorder” feature if you find it distracting or irritating in the cover art menu.

Speaking of scenes, of course, one can simply jump to a specific scene to find a favorite section of a movie (like on a Blu-ray), but with Kaleidescape you can also see favorite scenes that were recorded by content from the company team or those that you have saved yourself. At first, I didn’t realize that I could save my own favorite scenes. Once I learned I could, however, it became my new obsession.

The first time I recorded my own favorite scene, I went to the all-time classic romantic comedy, When Harry Met Sally and marked the beginning and end of a few scenes. One I titled “Sheldon the Wonder Schlong” for the scene where Sally claims she had “good sex” with a boyfriend named Shel Gordon. I also recorded a scene from another timeless, Back to the future, when Marty wakes up in the bedroom of his “lovely” teenage mother, who thinks the name on her underwear is her real name. I gave this scene the title “Calvin Klein”.

Building favorite scenes is a toy, sure, but it’s also a great way to enjoy a home theater or home entertainment system when you’re not in the mood or don’t have a need. no time to watch an entire movie or concert. Not only can custom integrators use it to create system demos, but proud system owners can also show off their gear more effectively with it. For me, it was a new way to get my family members to sit down and watch something together. 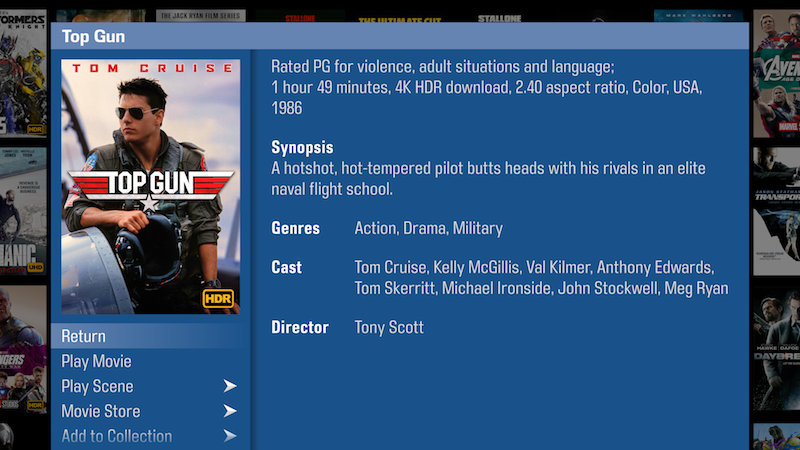 Committing to family movie night these days isn’t easy. My family members are always going in opposite directions, and no one has much attention span anymore. But, if I can say, “Hey, look at this funny scene from Back to the future“, even my Tic Toc teenage daughters will sit for a minute and watch the clip. Then when the scene stops at the end, I can hit the play button and continue watching the movie from there. It’s a sneaky “Trojan Horse” way to get my family members to watch a movie with me.

Some of the areas in which Kaleidescape has sought to improve since the arrival of current President and CEO Tayloe Stansbury in late 2020 are creating larger capacity movie servers and decoupling the server from the player so that multiple TVs can access the same content library throughout the house. By installing one player in my family room and another in my home theater in the basement, I was able to experience Kaleidescape’s ability to pause a movie in one place and resume it in another. Of course, this was never a big problem on my Apple TV, but it’s good to see Kaleidescape fixing what was once a limitation of its system. 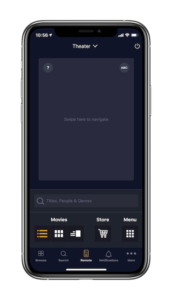 Let’s go back to the Kaleidescape application for a moment. I was surprised to learn that I would be looking at my system through the app, rather than using a remote. I’ve never been a fan of app-based TV control. Traditionally, it’s been difficult to create a “heads-up” experience when controlling media on a screen. I was pleasantly surprised, however, that Kaleidescape’s app was so easy to use. It works like a remote, just without the tactile feel of hard buttons. I found it to be relatively easy to maneuver around the on-screen Kaleidescape menu once I had the ‘terrain setup’. The main limitation of this approach, of course, is that the volume control is still on a separate device, so not ideal.

Overall my experience with Kaleidescape was very good. For someone who is already investing in a smart home system or home theater, adding a Kaleidescape system is a no-brainer. It’s still one of the best ways to manage a movie collection and enjoy movies and concert movies in their highest quality without the hassle of Blu-rays or DVDs.